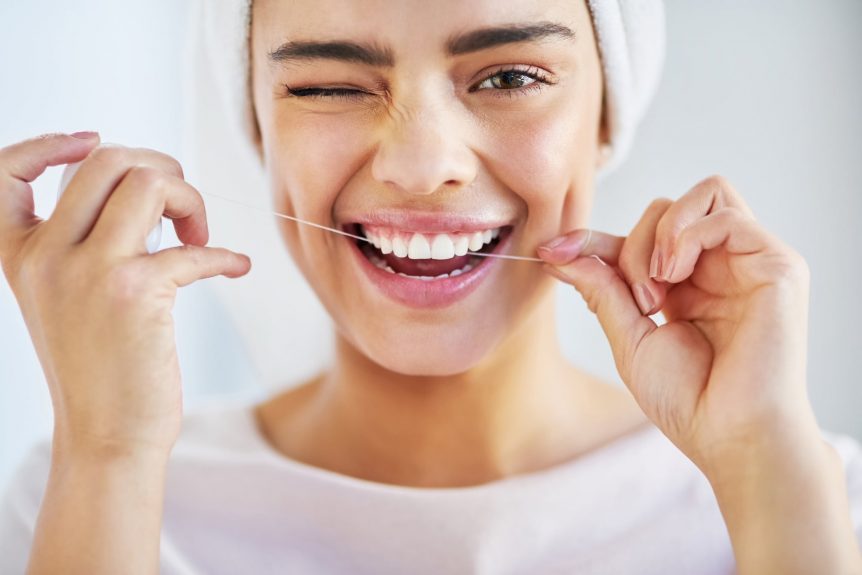 MISTAKE #1: Avoiding flossing because the gums are bleeding

The most common mistake people make when it comes to flossing (apart from not doing it enough!), is being scared to floss because it causes their gums to bleed. They usually bleed because there is something irritating them, causing inflammation – known to many as gingivitis.

It may seem counterintuitive but the treatment for gingivitis involves cleaning around the gums to remove any plaque and tartar. Imagine piles of bacteria nestled up against your gums. That is what is causing the bleeding, not the flossing. So basically, where the gums are bleeding, we should be cleaning, flossing and brushing these areas more frequently until the bleeding stops!

MISTAKE #2: Flossing is the only way to clean in between your teeth and it sucks!

WRONG! There are many ways to clean in between your teeth, however, flossing tends to be the fastest, cheapest and quickest way (believe it or not!).

You can actually get tiny little brushes that fit in between the teeth called interdental brushes. These are particularly useful when there is some gum recession and the gaps between teeth are larger.  They are also very good when flossing is not possible, for example during braces, under a retainer wire, or under a dental bridge.

Another good alternative is a water flosser. As the name suggests, it essentially uses a pressurised burst of water to rinse out plaque and food from in between your teeth. But remember to close your lips when using it, otherwise it can get quite messy!

MISTAKE #3: Most people are doing it wrong!

Dentists are always telling you that you should floss more – but have you been shown how to do it correctly? Good flossing technique makes a huge difference between a quick, efficient 1 minute task versus a frustrating, tedious chore. Firstly, many people forget that floss is slippery and even more so when wet with saliva.

So, in order to get a good grip, the floss should be long enough (around 40cm), so that you can wrap the ends around the tips of your middle finger on each hand 4-5 times to stop it from slipping. This should leave about 3-4 cm of floss between them.

Now, you can push this piece of floss using your index finger in between your teeth until you hear a satisfying click. Once down between the teeth, you should NOT be sawing your floss back and forth into your gums, but rather GENTLY sliding it down against the side of each tooth.

As you slide it down near the root of the tooth, it should also slightly disappear under the gumline – this is actually where most of the bacteria lives. After doing the side of one tooth, follow on with the side of the other tooth, then click the floss up and out, and move on to the next one. With practice, this will become super easy and quick, trust me!

If bleeding gums or gum pain persists then you should contact your dentist to have it checked out. Our gentle and friendly team at Chomp welcome all new patients in the Brisbane area. Come and check us out!